How half of the other half lives

So we left the travelogue with me full of beer and ayam goprek bakar, in a car driven by a houseboy, being driven to meet the parents of a teenager that my colleague and I had only really known for 6 hours.
Confused? You might have to go back a few episodes of this blog, to ‘Jakarta in a day’ to get the full picture. It’s worth it, I assure you.
We ended up in Cempaka Putih (I don’t know what it means, but the second word means ‘white’), driving down a scruffy dual carriageway with fairly large houses glowering in a self-satisfied way onto the road. Eventually we turned into a cul-de-sac with houses off each side. Parking up, we entered through a sliding security gate and then we met Angke’s parents.
We already knew a certain amount of what to expect. Angke had a fairly strict upbringing. Every evening that she wasn’t working in the hotel she had to be home by 8pm. She hadn’t had a boyfriend, only had a sip of alcohol once in her life, but oddly, had had her first cigarette aged 5. Her father was a chain-smoking Indian man who worked in finance and her mother used to be a cabaret singer and still played the piano.
I think that’s probably more facts than I know about most of my friends… it had been that sort of a day so far.
We were welcomed warmly, and offered coffee. Good coffee. Very good coffee, but apparently not the best; ‘look out for kopi luwak’, her mother told us (Luwak coffee). The younger sister said hello, then scuttled off, not to reappear while we were in the house. My colleague noticed a cabinet full of small perfume bottles.
‘My wife collects things,’ the father told us, just a twinge at the corner of his eye betraying the enormity of the pain behind that simple sentence. There were other, larger perfume bottles elsewhere; in all, perhaps 200 or more. ‘That’s why we have so many cats,’ he went on. ‘I hate cats’. Here, clearly, was a man beset by fortune. How sharper than a serpent’s tooth is a wife who collects cats, surely.
‘Would you like to see the cats?’ the mother asked. But of course. Downstairs, in a side room, were four cages and an electric piano. Inside one cage was a huge white ball of fluff with legs – this was apparently an expensive Russian cat.
Now I’m no lover of cats, but I especially have a problem with those snub-nosed ones. There’s something anti-evolutionary about them, something that suggests that ‘survival of the fittest’ needs to have a sub-clause to include inbred animals that are ugly and serve no useful purpose somehow managing to keep their Speedos dry whilst paddling in the gene pool.
Our driver’s bedroom was room next door. Bless him, he had pictures of Liverpool Football Club and Fernando Torres on the walls, and a hundredweight of fur in a skin bag in a corner. This, my friends, is what the world calls a Maine Coon. It’s just ridiculous, and apparently its genus classifies it as felis catus. Domestic cat. Subspecies wolf. 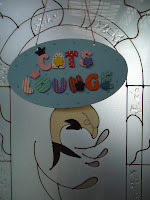 Upstairs there was a whole room of cats in cages. Now I appreciate that if these cats were allowed to roam free in Jakarta they wouldn’t last a day and that here they were cared for and healthy (recessive genes notwithstanding), but I couldn’t help feeling uneasy in this room. Time to go.


We said our fond goodbyes and promised to look after their daughter.

Angke took us briefly to the antiques market in Jalan Surabaya where an enthusiastic salesman tried to sell me a gong weighing about 50 kilos. No matter that it was going on a plane. He’d wrap it up. That’s ok then.
A brief journey in a bajay – a three wheeled motorised rickshaw that laughs in the face of MOTs and giggles inanely while sophistication glances the other way, then beers in Jalan Jaksa (Jaksa Street) and then we were off home, confused, bewildered, slightly disorientated but happy.
Why Jalan Jaksa? Angke wanted to take us to the place where the bule (white people) hang out. She thought it would be nice for us. Considerate girl… she’ll go far.
Posted by chris brannick at 02:45